As a parent who has now had the experience of bringing up a daughter through the ranks of club and school volleyball programs. I have come across a wide variety of coaching and training methods, techniques, and styles. And, I can say without a doubt that Ruth’s training style and knowledge is by far at the very top of the class. This became quickly apparent on our first interaction with Ruth. Within five minutes, I had learned more about volleyball than I had in all my previous years; and my daughter learned things no coach had ever taught or explained.

I will let her resume and experience speak for themselves and focus on what I believe to be the benefits Emily (My Daughter) and I have gained through working with Ruth.  We began training with Ruth just prior to entering high school. Almost immediately, changes in attitude towards volleyball, work ethic, and my daughter’s desire to better her skills skyrocketed. Emily will be a senior next year, and has made huge strides in the advancement of her skills and play during the years she has trained with Ruth, and hopes to continue playing throughout college. It is very rewarding when you see your child learn and begin to really grasp a process or technique she had struggled with in the past.

The volleyball training, however, just scratches the surface in our overall experience of Ruth’s tutelage. Ruth has gone out of her way to help us with understanding the college selection process, dealing with the frustrations that come along, and exposing Emily to opportunities and experiences she otherwise would not have had.

For me, one of the greatest intangible benefits of my daughter’s training with Ruth is the level of parental involvement.  Anyone with a teenager knows that finding an activity where you can have active and positive interaction with your child is priceless. As Emily approaches the time in her life when she will be leaving home soon, I really treasure my Sunday nights with her before, during and after her sessions with Ruth. I will truly miss them when she does move on.  I have also made some good friends and acquaintances through this program.

We both feel truly blessed and thankful for everything Ruth has done for us and the training received.

My daughter started training with Ruth when she was a freshman in high school. Little did I know that we were not only working with an outstanding VB trainer, we were also going to experience more about life, character, perseverance, nutrition, and physiology than we could have gotten anywhere else. Ruth Nelson works with young girls through college to make them the best person possible through developing their talent as a VB player. She carefully determined every girl's needs and then developed a drill, organized a practice team, analyzed a video, or whatever it took to help her see her progress. She offered incredible training camps that included three important variables. First, there were nationally recognized coaches recruited to instill skill and motivation in the players. Next, she included intensive conditioning to get the girls physically ready for the competitions she would encourage them to experience. Lastly, she devised self-esteem building activities that would carry them through the slumps in their game that would inevitably happen. She networked among college coaches like a walking "face-book page" usually having a phone earpiece in her ear when she wasn't training. But not to imply she wouldn't take time to listen to your concerns, she often knew them before you could even express them AND have a list of three possible solutions to help … whether it was an orthopedic specialist, physical therapist, VB shoe, vitamin therapy, specialized ankle braces, shoe inserts, or a creative way to work on a skill without being on the court. This was extremely important as we suffered setbacks that resulted in sideline positions, sometimes for most of the season. Ruth kept in touch and nurtured that desire to do whatever it took to get back on the court and to learn from every situation … even being on the sideline. If that wasn't enough, we'd see her at Rachel's games and wonder how she had time to do that as well. Then she would comment on how the training had transferred to the "real" court or whether more specific training was needed. Navigating the college-search maze can be daunting, but we always knew she was there for help, even if we were behind the ideal time-line. This included lengthy conversations following team visits to help sort out the very important factors in making the decision. Without her assistance, I don't know that Rachel would be as happy as she is today playing all-around the court with the Southwestern University Pirate Volleyball Team. Ruth instills a confidence in young women that allows them to go off to college with a strong set of skills to approach most every situation. She still keeps in touch and trains Rachel in the summers. Her multi-faceted training efforts will carry Rachel way beyond her time on the court and into her life as a successful professional at whatever she decides to do! THANK YOU RUTH!

I would not be the player I am today if it weren't for the training and mentoring I received from Ruth Nelson. Having started club volleyball when I was 11 years old, I always knew that I wanted to play volleyball at the college level. As I progressed through Junior High and High School, I was always a good player, but I quickly realized that if I wanted to be an impact player at the college level I would need more individualized training in addition to my high school and club teams. In the fall of my Junior Year I began training with Ruth and I started noticing improvements in my game immediately. I wanted individualized attention, and that is exactly what I got down to the smallest details! Ruth began by breaking down every aspect of volleyball from the mechanics of my arm swing to my movement around the court. This level of detail helped me become and more efficient and graceful player. She was very encouraging as I went through her unique drills and she taught me to ask questions about why she was having me do certain things which ultimately helped me become a smarter player.

Ruth also places a lot of emphasis on creating a well-rounded player. This aspect of her training was especially invaluable for me. Prior to college, my playing time was limited to the front row. However, Ruth saw my potential and helped me develop the mental and physical skills to become a back row player. In addition, she had me practice setting, hitting from the right side, blocking, serve receive, etc. This versatility not only helped immensely in the college selection process, but it was also valuable throughout my time as a college athlete. This style of training  not only allowed me to get a lot of playing time my freshman year at Southwestern University, but it ultimately led me to become a three year starter playing all the way around. However, Ruth's idea of a well-rounded player goes beyond the court as well. Ruth taught me how to be a mentally tough athlete, how to encourage and motivate teammates, how to deal with injuries, and how to be appreciative of the opportunities given to me by my parents and coaches. She helped me network with college coaches and was really invested in helping me find a college that fit both my athletic and academic goals. These are things you simply cannot get anywhere else! 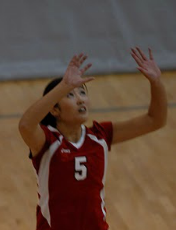 I started training with Ruth Nelson during my summer going into my junior year of high school. I had not been exposed to high level volleyball before as I had attended small Christian schools my entire life. She took me in with patience and confidence as I went from a mediocre volleyball player to being a highly recruited player by the beginning of my senior year. In just one short year, I went through her summer camps, private and group lessons, the NART program (water jump training), and helping her in lessons with younger players, each playing a key role in my development as a player. I gained the most through my private lessons as her patience taught me the discipline that I needed to be ready to play in college. Becoming more aware of my body with every touch of the ball, I learned something invaluable, self correcting. Another aspect of my training was helping her train younger players as I tossed balls and soaked up everything she was telling them. I became more observant of players and started noticing habits that would help me later as I watched opposing teams.

Not only was Ruth essential to my skill development but her genuine care for my wellbeing as a player, student, and person was what made me stick with her. Training was not always easy as excellence is expected and anything short of hard work would not be accepted. Even when things got tough, I could always count on her encouragement and her reminder of how far I had come. I learned one of the most important lessons in my life from her. During a tough private lesson when my frustration level with myself was high, she told me "Yui, don't forget how far you have come!" It's these countless moments with Ruth that I still treasure as I have finished my college career. I highly recommend training with Ruth Nelson because she is invested in every player. She builds skill, mental game, strategy, and confidence in her challenging and fun lessons. Ruth draws in players that are hard working and wanting to improve in all aspects.
© 2007-2015 brvc, LLC. All rights reserved.